Streamliners: Locomotives and Trains in the Age of Speed and Style par Brian Solomon 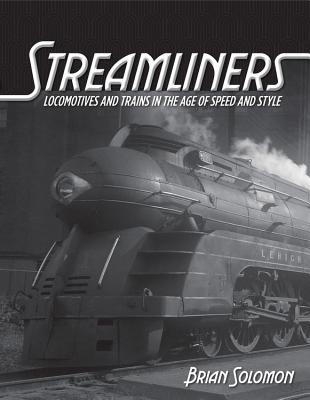 Brian Solomon avec Streamliners: Locomotives and Trains in the Age of Speed and Style

See the streamlined trains of the 1930s in all of their sleek glory.

In the 1930s, streamlined styling was applied to everything from kitchen appliances to farm tractors as it captured the American imagination. Keen to regain passenger traffic lost to automobiles and expanding roadways, railroads hired industrial-design giants like Raymond Loewy, Otto Kuhler, Henry Dreyfuss, and Brooks Stevens to produce sleek, futuristic shrouds for locomotives. These streamlined locomotives and trains became the most iconic in American history. Even today, classic designs like stainless-steel Zephyrs, shrouded Hudsons, and EMD E-units remain the popular conception of what a locomotive "looks like."

Streamliners : Locomotives and Trains in the Age of Speed and Style explores the historical and scientific context for the development of streamlined locomotives and trains, the designs that became standard-bearers of North American speed and luxury, and the contemporary popularity of the streamlined look in popular culture. Illustrated with rare historical photographs in both black and white and color, as well as period advertising, route maps, and patent design drawings, Streamliners elucidates the story of this fascinating design trend by following the various technologies and styling trends and how they changed the look of American railroading. Profiles of prominent designers and preserved streamliners in use today round out and complete this picture every railfan will want.

Streamlining was the product of the last great era of American passenger trains, when elegantly styled, named trains connected cities across the continent on fast schedules. Streamliners thoroughly explores the connections between style, speed, and the rails.